Lies – we hear them all the time yet so often we may not know they’re lies.

Sticks and stones may break my bones but words will never hurt me.

Now that’s a LIE. From the pit of hell. The Liar started this lie. The Father of Lies spread it so we would throw words around like baseballs. Not softballs. Hardballs. Aimed to H.I.T.  and Hit Hard. 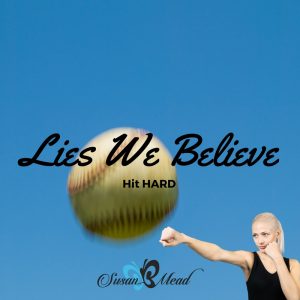 I heard this as a kid and said it a million times to myself over the years, yet words HURT. Forever. The scars are deep and the wounds are simply ragged.

Sam, Barbara, James, Linda, as the names of your friends are called when teams are picked. And you’re last. Least wanted. Unneeded on a sports team. Can you relate?

Smarty pants (just because I lapped up words from both the dictionary AND the encyclopedia like a 4 year old laps up ice cream from a cone). Word Nerd! Imagine, me writing and speaking. You too???!!!

Fatty, fatty, two by 4.
Can’t get through the kitchen door.

Granted, some of us were chunky or as one of my friends said – fluffy. Guys were husky. Girls were fat, even if it was just 5 extra pounds.

Bones. You’re just bones. What man is gonna want you without anything to you other than those skinny bones? What’s he going to hug? I heard someone say to one of my friends when we were in about 5th grade. She cried that night…and never has married.

You’re so smart, do it yourself – from my dad when I asked mom to help with spelling in 4th grade.

Dang, I STILL want to do things MYSELF. I feel like a 2 year old some days. “I do it,” I want to say. Let’s do it MY way OR we’re doing it my way. As if that’s the ONLY way. You got that control button pushed too? Still pushing it yourself?

She’s having sex, did you know? Even when it’s not true, some guys bragged simply to make themselves look like conquerors or whatever…

I read these words in the Bible and memories flooded in of lies I’d heard and believed or heard from others as they shared the depths of their pain. 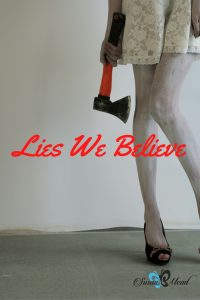 Now, there’s truth. Yet does it automatically set us free from the words embedded in our souls? Or from the lies we told on others?

Forgive me Lord for the words I hurled in anger, defiance or hurt.

They were unwarranted, unwanted and unwelcome. And many times untrue. Forgive me, Father.

I bought a chain saw the other day – yes, we are out in the country now and I need TOOLS, lots and lots of tools! Go ahead and laugh at me – I wanted one with a safety covering so I wouldn’t be cut accidentally. Like words cut. Forever painful.

Lord, put a safety guard on my mouth and my mind, please.

19 thoughts on “Lies We Believe”

The world and its desires pass away, but whoever does the will of God lives forever.
1 John 2:17
DailyVerses.net