Have you ever been in the presence of evil? Where you literally FELT it? I have…

My husband and I had the distinct privilege of cheering on my cousin, Amby Burfoot, as he ran the 45th anniversary of his 1968 Boston Marathon WIN. Yes, indeed, WIN.

We joined the elite marathon crowd at Cheers to the Boston Marathon, the Mayor’s Breakfast where 4 prior Boston Marathon winners were honored, the Runner’s World Boston Marathon celebration followed by VIP access to the gala and grandstands during the race. Can I simply say BUCKET LIST?!

Who knew this trip would be marked by a milestone moment in my life?

Amby was running in Wave 3 as family and friends were running with him. Why? To commemorate this monumental moment in his legendary running career. Amby was about 5 minutes out when a blast shattered the balmy day, fire leapt over 5 stories high in front of Marathon Sports, nails ripped into flesh and evil made an entrance.

Time warped. The black glass above LensCrafters literally popped out of the window frame and hung in mid-air prior to plummeting to the ground. The grandstands emptied as smoke – and people – dissipated. Holt calmly stated, “Wait so we don’t get trampled.”

Amby’s wife was following Amby in a van. I promptly texted her, “Two bombs just blew up.”

“The finish line,” I replied.

She reached Amby prior to cell phone coverage ceasing. “Meet us at the hotel,” was all she got out as he hit the wall of people piling up. Did you know? That was the first time Amby ever ran with a cell phone.

My favorite verse in the Bible came to mind, so I prayed fervently, “For He orders His angels to protect you, wherever you go.” Psalm 91:11. After that, the only other word I recalled was JESUS, which became my prayer mantra.

Want to see what I saw of the Boston Marathon bombing when I looked up?

Now, would you like to compare that to a photo of the Boston Marathon bombing published in Runner’s World May 2013? 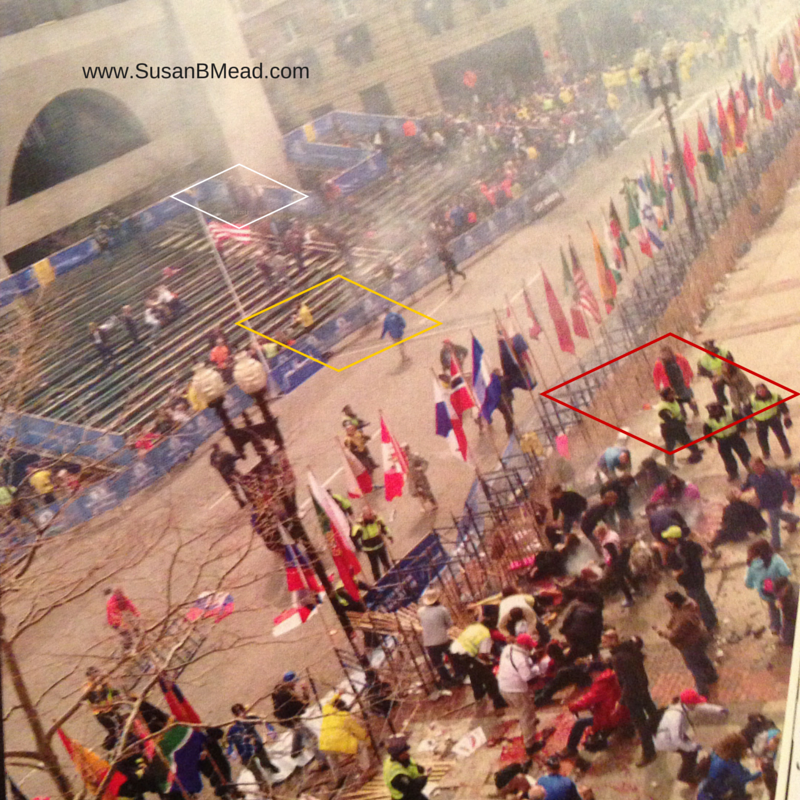 Oh, by the way, see the white outline in the grandstands with the person in a white jacket? That’s me, with my husband Holt behind me clad in dark somber gray…

BOSTON, MA — The first woman and the first Hispanic to head the U.S. District Attorney’s office in Massachusetts, Carmen Ortiz, led the case against Boston Marathon bomber Dzhokhar Tsarnaev, 21, who was recently convicted and sentenced to death.

Click Here to finish reading this compelling NBC News article about the prosecutor for the Boston Marathon bomber.

Tell me where to send your challenge please!

Yea, you are in! Look for calm to come your way soon...

29 thoughts on “Eyewitness to the Boston Marathon Bombing Terror”

Wives, submit yourselves to your husbands, as is fitting in the Lord. Husbands, love your wives and do not be harsh with them.
Colossians 3:18-19
DailyVerses.net