Breaking up is so, so hard to do. Did the old song ring in your ears?

Here’s the dirt on that…breaking up is hard, hard, hard to do.

Have you ever tried to break up? Simply H.A.R.D. 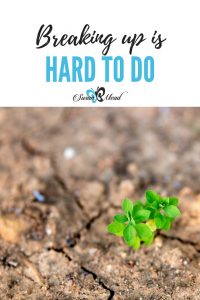 All that clay and those dirt clumps resist everything you through their way to break them up. Yes, we’re getting the scoop on breaking up dirt and clay today!

As a master gardener, I’ll start writing some posts for the gardener in you. Yes, Mrs. Brown Thumb, there is a gardener in there – somewhere! And Ms. Green Thumb, share! I wanna know your secrets too. Remember, the first thing God gave Adam was a garden – the Garden of Eden.

4 This is the account of the creation of the heavens and the earth.

The Man and Woman in Eden

When the Lord God made the earth and the heavens, 5 neither wild plants nor grains were growing on the earth. For the Lord God had not yet sent rain to water the earth, and there were no people to cultivate the soil. 6 Instead, springs[a] came up from the ground and watered all the land. 7 Then the Lord God formed the man from the dust of the ground. He breathed the breath of life into the man’s nostrils, and the man became a living person.

8 Then the Lord God planted a garden in Eden in the east, and there he placed the man he had made. 9 The Lord God made all sorts of trees grow up from the ground—trees that were beautiful and that produced delicious fruit. In the middle of the garden he placed the tree of life and the tree of the knowledge of good and evil.

Just like God had order when He created the Heavens and the Earth, there is order to working in the garden. One of the first lessons learned is the importance of the foundation for all your plants. That’s the dirt, the soil, you plant in. There’s a lot of dry sand where I live, yet I also have a ton (or ten!) of heavy red clay that was brought in for the carport and driveway foundation. Oh my, it is HARD. Rock solid hard.

Oh yea, there is another ton of gray paver rock that was pushed all over my yard. They told me it would “disappear” when the circle driveway was removed. I have one a response to that – yes, I can share it here! I believe I was told a little white lie…Grey rock is everywhere. Clink goes the shovel, over and over again. So much for that grey rock ending up buried under the carport and driveway and disappearing!

And you know a flower garden must abut that carport and driveway, right? I bet you already picture plants in your head. I’m curious now. Share below in the comments what plants you have near your driveway and home.

So what’s a gardener to do when faced with this gardening woe when a hoe doesn’t even make a dent in the surface?

Fix it. You must fix it.

How and with what? 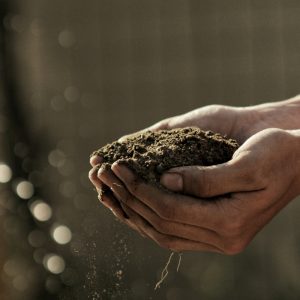 There is so much clay it overwhelms you – how do you start?

When you plan the beds first you then methodically make the modifications needed bed by bed to support the best garden possible, whether shrubs, flowers or veggies – or a mix.

You may want to start beds near the house or further away with a veggie garden. When you identify where you want to start gardening, you can then work the plan from that point in the timeframe you have available.

Back to breaking up.

If you start in the fall or winter, you can layer paper or cardboard directly onto the dirt, followed by layers of humus, compost, old soil, leaves, pine straw, or any other organic matter that will break down, ending with a mulch layer. This breaks down over time into amazingly friable dirt. I even add my bulbs into the layers as I’m building them so the flowers bloom in the spring! Shortcuts. I love shortcuts…

Have you just moved into a new house that needs a yard renovation? Reuse those moving boxes. Place them strategically to form the flower/shrub/veggie beds followed by covering with organic matter. Want to speed the process up? Cover the organic matter with a layer of clear or black plastic or landscape fabric then add mulch to hide this layer. This will hasten the breakdown of the organic matter into a layer of fine, rich soil.

And heads up – you can do this now. Simply cut holes into the plastic or landscape fabric layer where you want to plant, place your plant in the hole, and water. If you are using plastic, you will want to remove it in 6-8 weeks. Simply cut between the plants to lift the plastic out. Shake the mulch back on top. Discard the plastic. You have a bed off to a great start!

Oh by the way, remember to completely weight down the plastic or landscape fabric with brick, stones, or landscape staples or it will blow away, making a mess rather than creating a masterpiece.

Starting without paper? Awesome! Add an 8-10 inch layer of organic matter, then work it into the clay. Optimal depth is 8 to 10 inches. Yes, this is a lot of work, yet so worth it.

Spring time is the best time to tackle this chore, yet you may not want to tackle it immediately after a rain. Why? That is when that old clay is the softest! Simple. You do not want to compact the soil once it’s been dug and clay sticks together very well when it is wet. Give it a day or two to dry out just a bit, then dig in – while you can.

Or make up with your rock hard soil – and create a raised bed over top of it.

The great news is you decide whether to break up or make up.

Here’s to helping you find calm in the chaos of your garden.

14 thoughts on “Breaking Up is Hard to Do”

Then Jesus declared, “I am the bread of life. Whoever comes to me will never go hungry, and whoever believes in me will never be thirsty.”
John 6:35
DailyVerses.net