What comes to your mind when you read that word, meditation?

As Christians, we often are skeptical of the practice of meditation, especially when we connect it with other religions and spiritual practices. However, meditation is a general term used to cover a variety of techniques, many of which fall both inside and outside the remit of the practicing Christian. This is actually a topic you can further educate yourself on below.

As we have read before, know thyself and know thy enemy. So it is in our best interest to know what God’s word says about meditation if we purpose to follow His will in His Word.

The term meditation refers to a variety of practices, some spiritual, some religious and other non-denominational. The synonyms of this term can help us to establish a greater understanding of what it means to meditate. For example, the words contemplation, thought, pondering, reflection, and prayer are all other ways to describe the meditative process. None of which at first glance are contrary to the beliefs of the practicing Christian.

What are the benefits?

Before we get into more detail about the different types of meditation, and whether they are compatible with the Christian lifestyle, let’s highlight the many associated benefits of the practice. Here’s the deal. While I respect Dr. Oz for much of his input regarding my health, he is not who I turn to for spiritual advice.

Evidence suggests that some forms of meditation help reduce anxiety, improve sleep, and lower blood pressure. At the same time, claims for specific forms range from deepening the participant’s faith, allowing them to better live in the moment, and even leading them along the path of ultimate enlightenment, which for a Christian is being in the presence of God. The larger and more esoteric the claim, usually the less concrete evidence you will find in terms of scientific study. Something that means discernment is crucial when it comes to meditation. 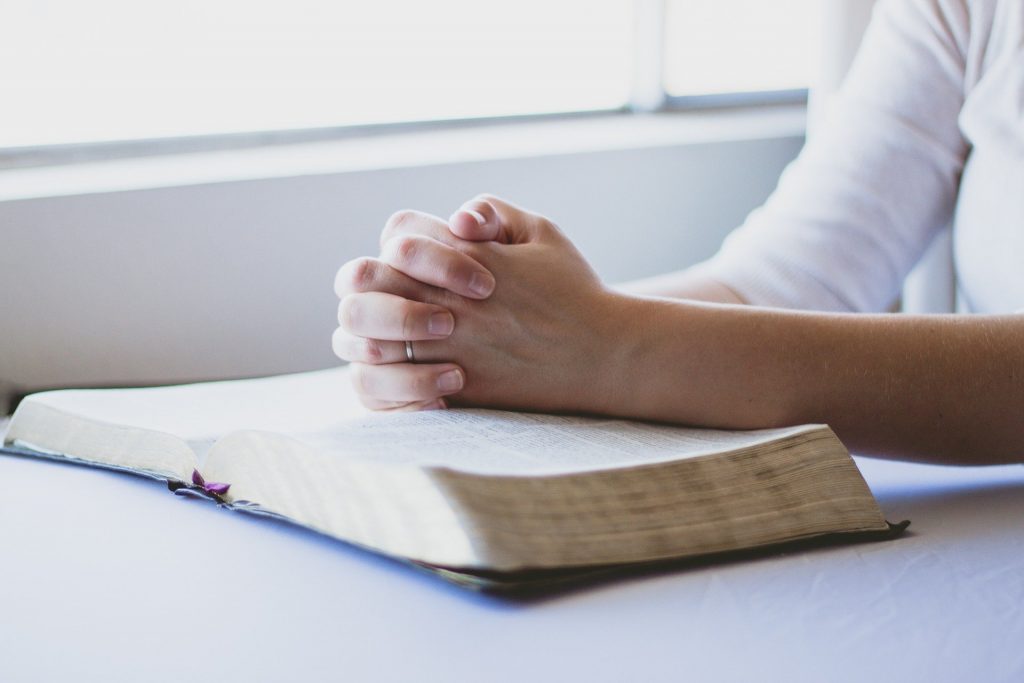 What are the types?

It is wise to note, that not all forms of meditation are the same, something that can make the waters of practice muddier for the one walking the Christian life. Of course, education on what each form entails is vital to ensure the correct choice here.

Mindfulness meditation, while based on the teaching of Buddhism, Vipassana and Zen, in particular, is in the west mostly practiced as a non-religious activity. It is worth noting that this is not always the case in the East, however. Many people from Asia and even some in the US, state that these practices do have a spiritual element.  As a Christian, you may prefer to follow the teachings of Christ versus methods taught by a different religion.

To further confuse the matter you will find the principles of mindfulness applied in many psychological treatments including CBT, ACT and MBCT all of which have excellent evidence bases and are practiced by people of many different spiritual and religious backgrounds.

The main focus of mindfulness meditation is to notice what is happening at the moment, particularly concerning our bodily sensations and thoughts. The goal is to observe these without judgement, and by bringing conscious awareness to their experience, those practicing this form can better choose their actions, rather than letting their emotions control them. As a Christian, we can pray to the Lord; He will guide us to make godly decisions for our health and wellbeing.

Most psychology and psychiatric treatment is founded on man’s study of the mind, thus the term mindfulness. I wanted to be a psychiatrist  in my younger years as people who are dealing with depression and other horrid diseases of the mind need relief. I love that the Bible says renew your mind daily, for His word is sent for a purpose and will not return void. What a promise.

In contrast, there is also meditation that has an explicit spiritual purpose. Here we tend to think of the practices of Eastern religions such as Hinduism, or new age spiritual practices where meditators aim to forge a deeper connection with the universe. Transcendental meditation is the most well-known example of this.

As you can see, spiritual meditation also includes the practice done from a Christian perspective as well. There is even a long-held tradition of meditative practices in the Christian tradition that modern believers often forget or disregard.

One of those days Jesus went out to a mountainside to pray, and spent the night praying to God.

In particular, this practice focuses on contemplation, silence, and scripture. The idea being that people practice it for a deeper connection with God and allow him to broaden their understanding of the meaning and application of these Bible passages in their lives.

One example of this is the mala beads used in Japa meditation or as it is otherwise known mantra meditation, a practice that is common in Buddhism, Hinduism and those practicing Yoga. The idea being that using each bead to focus and as a mark of each mantra. Therefore achieving a better level of concentration. This practice is in very similar to that of the Catholic tradition of saying the rosary.

Of course, there are many other forms of focused meditations from mindfulness eating practices to staring into a lit candle flame, which are usually associated with religions other than Christianity.

If you think meditation is all about sitting still and crossed legged for long swathes of time, you may be in for a bit of a shock. Several meditations also involve significant movement, which makes them perfect for people that don’t thrive in sitting still.

Probably the most commonly practiced form of movement meditation is Yoga, which consists of different asanas or poses intending to strengthen the body, and focusing the mind.

Yoga came from the Hindu tradition and was used to prepare both the body and mind for long sitting meditations. Although now many people use the practice as a form of mediation and exercise in and of itself, not realizing the Hindu religious foundations of yoga.

Of course, because of the substantial religious and spiritual aspects of Yoga, many Christians worry whether it is a suitable activity. In fact, in response to this, there are several organizations like the https://christianyogaassociation.org/postures-of-prayer/ that provide practices with similar benefits and much more of a Christian focus.

Qi Gong, in particular, is seen as a way to control and encourage the energy within the body. This practice has close links with traditional Chinese medicine, the meridian system and the spirituality behind it.

There are even forms of dance meditation such as the 5 Rhythms. These have been developed as a form of expression and as a way to meditate at the same time. However, such an approach is not without its critics due to its new-age focus.

So I ask, is new age consistent with Christianity? Many times they believe similarly to Christians yet they look to a different source for their spiritual input and as the foundation for their beliefs. Christians turn to and trust the Word of God.

What equipment do you need?

Contrary to popular belief, you don’t usually need any equipment or accessories to practice meditation as a mostly internal habit. However, having said that there are most definitely some items associated with meditation that you can invest in if you so choose.

Probably the most popular of these is a yoga mat, a rubber oblong that allows those practicing Yoga to achieve a stable position. Another popular mediation item is the zafu, usually accompanied by the zabuton. A cushion and pad from the Zen tradition used to help those practicing seating mediation achieve the right posture.

Additionally, there are other things mediators may also wish to invest in such as guided meditations that can be brought from streaming services. There are even books such as the Gifts of Being Yourself by David G Brenner, which details a scripture-based meditative practice from a so-called Christian perspective.

All I can say is buyer beware of any new sources! Research authors in many places before you accept the label of Christian when you are not familiar with a newfound author.

What is the Christian view on meditation?

We have already seen that meditation is not essentially an un-Christian thing to do. Many scriptures in the Bible refer to the practice of meditation directly including Joshua 1:8 which states – Keep this Book of the Law always on your lips; meditate on it day and night, so that you may be careful to do everything written in it. Then you will be prosperous and successful.

Then there is Ps. 1:1-2 – Blessed is the one who does not walk in step with the wicked or stand in the way that sinners take or sit in the company of mockers, but whose delight is in the law of the LORD, and who meditates on his law day and night.

Not to mention Ps. 119:15 – I meditate on your precepts and consider your ways, as well as several others that reference meditation directly.

However, there is a significant difference between the practice of Christian meditation and the other types. This critical difference is that the focus should be squarely on God, and his word rather than anything else.

Just as the Bible encourages us to think on God and “whatever is true, honorable, right, pure, lovely, and of good repute” in Philippians 4:8 in our day to day life, then that should be the basis of our time for meditation. This is what differentiates Christian meditation from other kinds in both its method and focus.

God. His Word, Jesus. The Holy Spirit of God. Think on these things.

Whether you choose to meditate or not as a Christian is a personal choice. It’s a choice we can discuss with a church leader, and pray on for guidance if we are unsure.

While not every form of meditation may be suitable for those with the Christian faith, it certainly is interesting and valuable to learn about other religions practices and beliefs.

Additionally, the understanding that particular forms of meditation have a long history within the Christian religion is an important aspect to note. An element suggests some meditation may allow a deeper understanding of the Gospels, and, ultimately, a closer relationship with our Lord.

Meditate day and night on His Word, the Bible. Walk in His Way for here is what I know to be true. Jesus is the Way, the Truth and the Life. Glory to God Almighty!

So do not fear, for I am with you; do not be dismayed, for I am your God. I will strengthen you and help you; I will uphold you with my righteous right hand.
Isaiah 41:10
DailyVerses.net