Three. The number of completion. Unity. Community. Even God exists as the Trinity, in union and community with the Father God, Jesus Christ the Son of God, and the Holy Spirit of God. 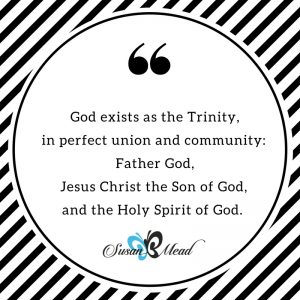 Wow! I had not considered the community aspect of the Trinity yet it makes perfect sense. A cord of three is STRONG. How much stronger the supernatural cord of Three? 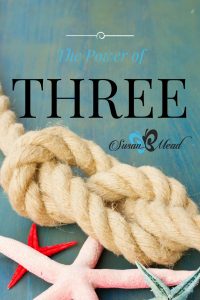 12 By yourself you’re unprotected.
With a friend you can face the worst.
Can you round up a third?
A three-stranded rope isn’t easily snapped.
Ecclesiastes 4:12 (MSG)

Community is God’s vision for us as He created mankind. In His perfect image. Made for community.

26 Then God said, “Let us make human beings in our image, to be like us. They will reign over the fish in the sea, the birds in the sky, the livestock, all the wild animals on the earth, and the small animals that scurry along the ground.”
27 So God created human beings in his own image.
In the image of God he created them;
male and female he created them.
Genesis 1:26-27 (NLT)

This sent me on a quest to learn more about the Biblical meaning of the number 3. Did you know that 467 times, the number 3 is used in the Bible? It is the first of four spiritually perfect numerals, 3, 7, 10 and 12.

You may remember there were three righteous patriarchs prior to the flood – Abel, Enoch and Noah. Enoch didn’t even die. God just took him straight up to Heaven. Enoch was there, then he wasn’t. So incredible what our Mighty God can do!

Following the flood, there were three righteous “fathers” – Abraham, Isaac and Jacob – or Israel after he was renamed as the father of the 12 tribes of Israel. (There’s one of those spiritually perfect numerals…)

How many books comprise the New Testament? 27. Another question – did you know 27 is 3 x 3 x 3? Yes it is. “Completeness to the third power” according to The Bible Study Site.

Jesus. He was 12 when we first read anything about His childhood. In the Temple of God as a child – teaching. Wise. Wow.  He started His ministry at 30 and it lasted three years. He died at 33. He rose after 3 days in the grave, yet I had not truly comprehended some other details surrounding the day He died.

Jesus prayed three times in the Garden of Gethsemane.

I was there in Jerusalem about 18 months ago – in the Garden of Gethsemane kneeling at the stone where it is believed Jesus prayed. Jesus felt the weight of the world literally press so hard upon Him, He sweated blood as His friends took a nap. Forgive us Lord! Grief and reverent awe are still powerfully present and overwhelming in that place. 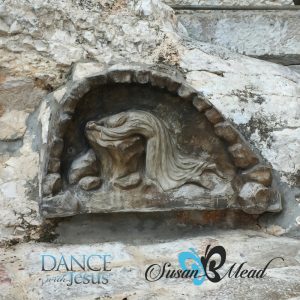 Darkness covered the earth as Jesus hung on the cross, cursed before man and God. Even God could not look upon His own Son as every sin you and I – and all who came before and after us – was heaped upon Jesus. The world turned BLACK as God turned His back – from the 6th hour to the 9th hour. Yes, three hours.

Three is the number of resurrection.

Three days and three nights, Jesus fought the battle with death and WON. He is the Key to Heaven and overcame hell, you know. Thank You, Lord God Almighty, for Your Holy plan. It is good.

Now, let’s consider the transfiguration of Jesus on Mount Hermon.

The Transfiguration
17 Six days later Jesus took Peter and the two brothers, James and John, and led them up a high mountain to be alone. 2 As the men watched, Jesus’ appearance was transformed so that his face shone like the sun, and his clothes became as white as light. 3 Suddenly, Moses and Elijah appeared and began talking with Jesus.
Matthew 17:1-3 (NLT)

Jesus, Moses, and Elijah were present at the transfiguration of Jesus. Powerful three.

I have a question about 6 days later – later than what?! Oh my, remember – Jesus predicted His own death by suffering at the hands of 1) the elders, 2) the leading priests and 3) the teachers of the religious law. I see three here too…

Jesus Predicts His Death
21 From then on Jesus began to tell his disciples plainly that it was necessary for him to go to Jerusalem, and that he would suffer many terrible things at the hands of the elders, the leading priests, and the teachers of religious law. He would be killed, but on the third day he would be raised from the dead.
22 But Peter took him aside and began to reprimand him for saying such things. “Heaven forbid, Lord,” he said. “This will never happen to you!”
23 Jesus turned to Peter and said, “Get away from me, Satan! You are a dangerous trap to me. You are seeing things merely from a human point of view, not from God’s.”
Matthew 16:21-23 (NLT)

Lord, let us see with new eyes the truth of Your exquisite word as well as the nuances and subtlety supporting the words we read.

Did you notice Paul was caught up to the third heaven? Oh – three! The very Throne Room of Heaven where God resides. Paradise. Jesus told the man dying beside Him on the cross He would see him in Paradise today.

The third heaven. Here’s some good news – that’s another lesson for another day! I may not be able to humanly express it in words though according to Paul…

God, You are so good to us, Your sons and daughters.

May we take Your message of hope to the hopeless. You alone open blind eyes, remove scales and lift the veil to let Your children see the truth of who You are.  Thank You for revealing Yourself to those of us who already know You. Thank You for providing us Your words in the Bible to share. You say Come and Go.

Come to Me and Go and Tell. Yes Lord! #DanceWithJesus

22 thoughts on “The Power of Three”

The world and its desires pass away, but whoever does the will of God lives forever.
1 John 2:17
DailyVerses.net