Sunday. Came on Saturday? How can that be?

Jesus spoke in riddles and parables. And truth be told, He had to translate His words into every day English – mmmm, I mean Aramaic – so His disciples could understand what He said. Now Susan’s talking in riddles too! What in the world is this about?!

The sun stood still for Joshua to fight a battle, yet that was centuries ago. Is God still performing that kind of miracle? If you have not read this incredible story, I encourage you to do so now. It’s only 15 verses. Here’s the link for you to Joshua 10:1-15.

God packs a punch is just a few words, doesn’t He? Oh yes – Jesus IS The Word!

12 On the day the Lord gave the Amorites over to Israel, Joshua said to the Lord in the presence of Israel:

“Sun, stand still over Gibeon,
and you, moon, over the Valley of Aijalon.”
13 So the sun stood still,
and the moon stopped,
till the nation avenged itself on its enemies,

as it is written in the Book of Jashar.

The sun stopped in the middle of the sky and delayed going down about a full day.14 There has never been a day like it before or since, a day when the Lord listened to a human being. Surely the Lord was fighting for Israel!

And there is God, listening and responding to the prayer of a human being, Joshua. Making miracles, multiplied miracles.

The sun STOOD STILL in the middle of the sky.
For a full day.
The moon stopped.
Surely the Lord was fighting!

And God listens to you too and hears your prayers too. He also fights for you. So may I ask – do you need a battle to be fought by the Lord for you? There will never be a day like it before or since for you, a day the Lord listened to you. So ask Him…

So what does that have to do with how Sunday came on Saturday at my house last week? Miracles. Multiplied miracles.

Months ago, my brother-in-law’s niece asked if I would take her kitty when they moved. Of course, I replied!

Then I got two male kittens a couple of months ago. Frankly, it had been a while and I had forgotten about Jennifer’s request.

And Jennifer messaged me last week to ask if I would take her kitty as they were moving on Monday. Of course, I replied!

So on Saturday, August 5th, I packed the pet carrier and proceeded to Jennifer’s barn to get her kitty. What a beauty! An orange and white tabby female. Named Sunday… 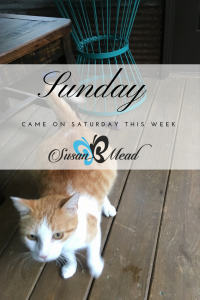 That’s how Sunday came on Saturday at my house last week.

Oh by the way, July came in August that same day…

Pardon me and riddle me this, as the Joker said on many a Batman episodes.

Can you guess her name?

Oh my. I learned something. I thought one more kitty would be fine. 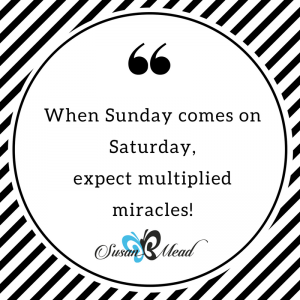 48 thoughts on “Sunday Came on Saturday”

Our God is in heaven; he does whatever pleases him.
Psalm 115:3
DailyVerses.net